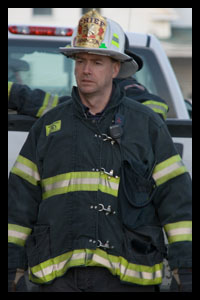 He was born and grew up in Farmington and graduated from Mt. Blue High School. Graduated from Maine State Fire Academy in 1981 with a Firefighter I &II certification, Hazardous Materials Technician May 1991, In January 1993 became the Town’s Emergency Management Director.

In his spare time, he enjoys being with his wife Denise and son TJ and his dog Dexter. Also getting together with family and friends.