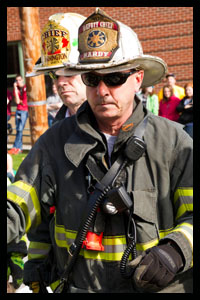 Tim A. Hardy joined the Farmington Fire Department on March 1, 1978. Was promoted to Lieutenant August 12, 1984 and was promoted to Assistant Chief September 5, 1991, and then promoted to Deputy Chief on May 2000.

Grew up and attended schools in Farmington, graduating from Mt. Blue High School. Graduated as a Firefighter I&II from the Maine State Fire Academy in Presque Isle in 1982. Hazardous Materials Technician May 1991.

During spare time enjoys being outdoors, snowmobiling, boating, Camp at Clearwater Lake, and getting together with family and friends. 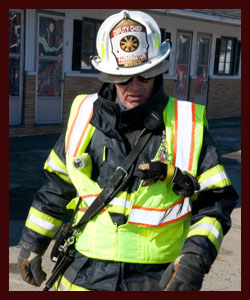 S. Clyde Ross joined the fire department in May of 1971 and has been a chief officer since 1978.  During the years Clyde has achieved Fire Fighter I and II, Instructor I status, and has been recognized as Chief Fire Officer 1.  Clyde has been involved with helping set up numerous fire fighter training programs forFarmington and the county departments.  He has been responsible for numerous fire prevention programs in the local schools and has presented programs to a number of local organizations.  He has been involved with the Foster Vocational Center fire fighter program in RSU9 since its beginning in 2001.

Deputy Ross graduated from Farmington High School and the University of Maine.  He taught school in SAD #52 and SAD #9 prior to his retirement in 1996.  Since then he has been involved with numerous town and county committees serving as the current Chair of the Farmington Budget Committee, Assessor for the Farmington Village Corporation (Water Co.), member of the County Dispatch Building Committee, served on a number of oral boards for hiring personnel and was a former officer with the Franklin County Agricultural Society.

Currently Clyde is involved the local Emergency Management Agency as its Public Relations Officer.  If you listen to radio station WKTJ you will hear numerous PSAs offering safety tips for the public.  He has participated in a number of emergency exercises and drills from the planning stage to the live drill itself.